Howdy folks!…If you missed me I want to say that I’ve been all right…Just living on the outside more versus the cyber world…the weather has been real nice too…maybe a little too nice because we are supposedly having a drought…the other side of the map is having severe cold and storms and we aren’t having anything…we need rain; we are Ag country where I live and its a little too dry for farmers…the water rations aren’t working out; the POTUS even visited our town and a few surrounding the other day to check things out!….but we have at least two more months of “rain time” so we’ll hopefully get some sprinkles around here soon…
This blog post is one of a few that I’ve written but I just didn’t feel like taking pictures for ’em….I haven’t felt like taking pictures of myself or of the stuff I’ve been making for my own Cancerian reasons; and I’ll leave it at that….I have definitely still be sewing and those blog posts will surface in due time I guess….
Now since last night the sewing bug has been biting; I really don’t know if I even slept…but I got up on the early side and went straight to my sewing room this morning…Yesterday evening I cut out a hi-low skirt pattern; Simplicity 1695 and sewed up View A…..it turned out very pretty too….I used a silky fabric that got on my damn nerves when I was using it though….but in the fabric’s defense slippery fabrics always get on my nerves….they move around waaaaayyyyy too much but they make for such pretty, pretty garments….so us folks that sew just fight and tussle with them until we get something we like….and that’s exactly what I did….I love it and I may even wear it tomorrow…..my selection of cool clothes is constantly growing….
I also did a refashion…I was about to make sew up some kind of top to wear with my new skirt but an old sweater (that also gets on my nerves because of the turtleneck feature) caught my eye….I politely cut that damn turtleneck off and neatened up the edge….now I can stand it again….I really liked the sweater when I first copped it; but the turtleneck was so “choke-y” all the time…Singer scissors and my machine = problem solved….
Anybody been refashioning anything lately?…give me a link to it if you have…..I’ve been teaching myself draping principles too….I got something totally HOT to show off too….but it has to warm up wayyy more for that one….stay with me good people and I’ll talk to you soon!…Photos now….
~~MsKRS~~ 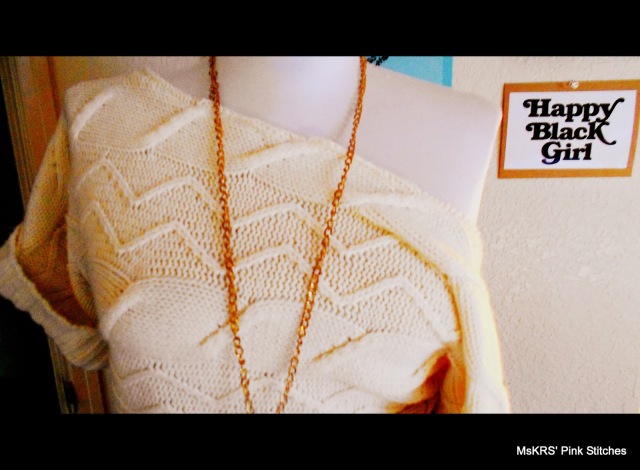